Rupture of the cranial cruciate ligament (CCL) is the most common cause of persistent hindlimb lameness in dogs. Certain breeds such as Labrador-retrievers, Rottweilers, Great Danes and West Highland White terriers are particularly prone, however any breed can be affected.

The cranial cruciate ligament is one of four ligaments in the dogs stifle joint (the same as the human knee). Its job is to stop the tibia moving too far forwards or excessively internally rotating. In people, injury to the equivalent ligament, the anterior cruciate or ACL, is normally due to an accident involving excessive force, commonly a football or skiing injury. While a traumatic rupture is possible in dogs, in most cases this is a spontaneous and slowly progressive condition. The exact cause is unknown, but the canine stifle has effectively got a design flaw where the ligament is not strong enough to resist the daily forces. 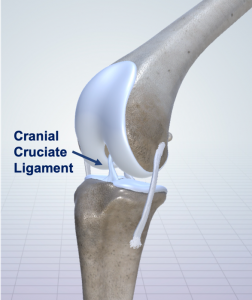 In the early stages, tearing of a few fibres of the ligament starts occurring. Some dogs will then have mild persistent lameness for months or years. Osteoarthritis develops and affected dogs can also tear a specialised cartilage within the joint called a meniscus. In other cases, the ligament becomes progressively weaker without the dog showing any pre-existing lameness. The weakened ligament can then fully rupture resulting in severe lameness without any apparent accident. Some dogs can appear to have ruptured the ligament accidently when in fact the ligament was going to fail anyway. Sometimes dogs will spontaneously partially or fully rupture the CCL in both hindlimbs simultaneously.

Could my dog have a CCL rupture?

The signs or symptoms of CCL rupture are very variable. Some dogs may show stiffness after rest which wears off within a few minutes. Sometimes this is simply assumed to be old age or arthritis. Other dogs show mild persistent lameness over several months. They may appear normal during short walks, but lameness and pain develops during or following more strenuous exercise. Other dogs can show severe lameness and sometimes are completely unable to use the leg. This severe lameness may or may not be preceded by period of less severe lameness or stiffness.

Some dogs can have bilateral ruptures where the ligaments in both back  legs fail at the same time. These are harder to recognise as the dogs may not limp. Owners may notice stiffness on rising, reluctance to exercise, pain after exercise or difficulty jumping. Frequently this is mis-diagnosed as arthritis or old age.

How do vets diagnose CCL rupture?

The specific test is the cranial drawer test when the tibia is forced forwards. Movement greater than normal is diagnostic for CCL rupture. This test can be painful and some dogs will not allow it without sedation or anaesthesia. In some dogs with a partial rupture, there is enough remaining ligament for this test to be negative even when the dog is suffering moderate to severe pain and lameness. Other dogs which have a slowly progressive rupture will develop joint thickening. This can make it impossible to detect an abnormal cranial drawer motion despite the ligament being fully ruptured.

Radiographs (X-rays) are almost always recommended. The ruptured CCL cannot be seen on a radiograph but joint swelling and or osteoarthritis with no other cause are strongly suggestive. Radiographs are essential to rule out other causes of lameness before proceeding with surgery and special views are needed to plan certain surgeries such as a tibial plateau levelling osteotomy (TPLO). Joint fluid analysis is sometimes performed to rule out infectious of immune system causes of joint pain or swelling.

In some cases the diagnosis is only confirmed during surgery. The ligament can be inspected with either an arthrotomy (small incision) or arthroscopy (camera based, keyhole joint surgery). Joint inspection is also performed to assess the meniscal cartilages within the joint which frequently become torn after the CCL fails.

Some smaller breed dogs can have acceptable outcomes without surgery. The hope is that joint thickening and secondary scar tissue will stabilise the joint and effectively take over the function of the ruptured ligament. This is most effective in toy breed dogs who do not exercise heavily.  Treatment involves strict rest for 6 – 8 weeks while the scar tissue forms. Small dogs which previously enjoyed long and strenuous walks may never return to function. Non-surgical treatment can be attempted in larger dogs but in most cases lameness and pain will persist. Sometimes, due to other health concerns, surgery is not possible. The severity of the pain and lameness may be reduced by long term use of medications.

In the majority of cases surgery is recommended. There are two main types of surgery  – ligament replacement or a tibial osteotomy. Ligament replacement was one of the original methods and there are lots of different types and descriptions, such as extracapsular stabilisation or a lateral suture. Newer ligament replacement techniques have been developed using stronger implants such as the “Tightrope” procedure. It is important to remember that in most dogs the original ligament failed without any accident occurring. Furthermore mechanical testing shows that all current implants are actually weaker than the original ligament which has already failed. For this reason we expect all ligament replacement implants to fail, stretch or loosen within the first few months. It is thought that the dogs that improve from this technique do so by the production of scar tissue around the joint rather than the implant providing long term stability. This approach is therefore unpredictable, some dogs appear to do acceptably well but others can have ongoing persistent lameness. 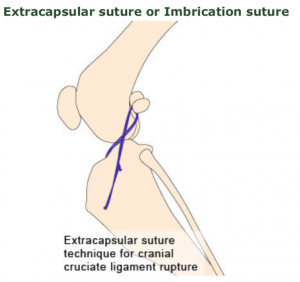 As ligament replacement has been shown to have variable results, an alternative approach is to change the biomechanics of the dogs stifle (knee) , such that the joint is stable during motion when no CCL is present. The tibial plateau levelling osteotomy (TPLO) was the first commonly used technique to achieve this aim. 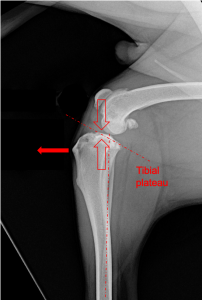 Dogs have a naturally backwards facing joint surface – the tibial plateau. The force of weightbearing causes the femur and tibia to be pushed together (open arrows). Due to the tibial plateau angle, this pushing together forces the tibia forwards (solid arrow). The cranial cruciate ligament resists this force.

Newer techniques such as the tibial tuberosity advancement (TTA), the triple tibial osteotomy (TTO) and the modified Maquet (MMT) have since been described. The TPLO is the only technique that has been shown in clinical trials to be superior to ligament replacement. Recent studies also show that TPLO has better outcomes and less complications than the other dynamic techniques.

A TPLO involves making a curved bone cut (osteotomy) and the rotating the top of the tibia with the joint surface. This aims to eliminate the force pushing the tibia forwards during weightbearing. The osteotomy is stabilised with a bone plate and screws.

The implants are strong enough to allow immediate and full weightbearing after surgery. Most dogs will be confident to use the leg well within a few days. The greatest challenge is preventing excessive use. We recommend confining the patient to a cage, pen or small room when unattended for eight weeks. Walks are limited for toilet purpose only for the first two weeks prior to gradually increasing lead walks. We perform radiography (X-rays) eight to ten weeks after surgery before giving the all clear to return to off lead exercise. While most dogs are substantially improved by this stage lameness can take up to six months to fully resolve.

We expect most dogs to make a full recovery and return to function very similar to before surgery. Osteoarthritis will slowly progress but it does not typically cause lameness or require treatment with medications.