Cruciate disease in dogs is a common orthopaedic condition in general veterinary practice. While no cause is officially established, many practitioners agree on a genetic link to the gradual decline of the cruciate ligament in certain breeds. These can eventually lead to lameness or sudden rupture.

Learn more about causes and treatment options for a cruciate ligament rupture in dogs.

In treating the ailment there are two frequently asked questions when it comes to extracapsular stabilisation of cruciate disease are:

What suture material should I use?

Ex vivo and in vitro models provide evidence with regards to the choice of material, method of fixation and site of attachment of implants for extracapsular stabilisation. Monofilament nylon leader material has been shown to have superior mechanical characteristics compared to other commercially available suture materials (1). Specifically, Mason hard-type nylon leader (Otisville, MI) has been shown to have the best mechanical properties (compared to 4 other types of fishing line) following ethylene oxide and steam sterilisation (2). Additionally, ethylene oxide sterilisation has higher preservation of the mechanical properties of the tested fishing lines compared to steam sterilisation.

Recently polyethylene sutures marketed specifically for extracapsular stabilisation have been shown to have superior mechanical properties compared to nylon leader materials3. Potentially FibreTape, Arthrex Vet Systems (Napels FL) has superior mechanical properties compared to other commercially available polyethylene sutures. However, in a later study, LigFiba was shown to have the greatest tensile strength followed by Xgen Orthofibre that was stronger than Fibre Tape and Fibre wire, and the weakest was the monofilament nylon leader line. LigaFibre was found to be the stiffest of all tested materials at 3 mm of elongation. Cyclic elongation was greatest for the Monofilament nylon leader line elongating 3.75 mm after 1000 cycles. All polyblend braided materials continued to elongate throughout the 1000 cycles under physiologic loads4. The clinical significance of utilising materials with superior mechanical properties (i.e. polyethylene sutures vs. nylon leader materials) is not known. 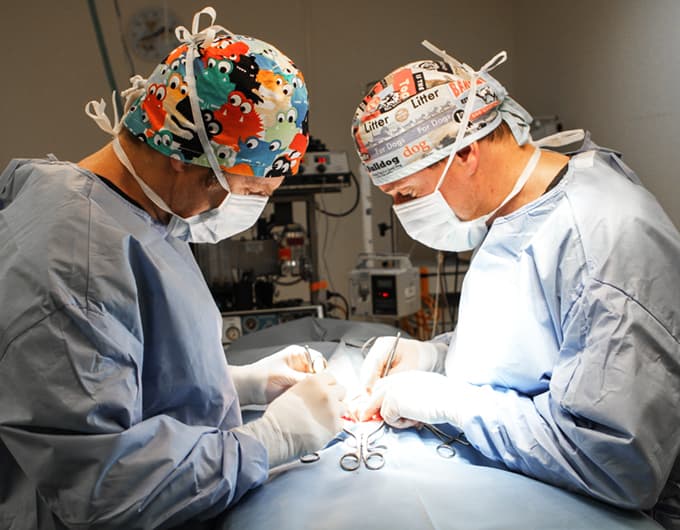 What suture configuration is best and how do I secure the suture?

If you are a referring vet, please use our online referral form to submit a case enquiry to our veterinary surgery team.